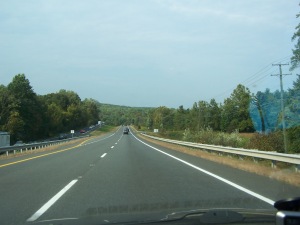 I was in such a hurry to leave VA, we did not really take any roadside pics, even though the scenery was really pleasant. Now, Tom had trusted me to map the route and of course you can’t avoid mountains when you travel west from VA. I chose the PA route over West VA, although we crossed a bit through West VA too. It turned out to be a good decision as the grades were less steep than when I journeyed through the mountains 14 years ago in WVA. This is the last picture taken of Virginia.

As you can see, Gracie did better than I. She was chilling, and I was hanging on for dear life. Our first stop was in Warrenton, Virginia, but like I said, I was in such a hurry to put as much distance as I could between me and Virginia that we did not take many pics.

Our first stop was in Hagerstown, Maryland, about 180 miles away from Richmond. This is Gracie chilling on the bed in the hotel on the ever-present animal-striped blanket she seems to have adopted.

1 thought on “Day 1 of the move from Richmond, Virginia to Chicago, Illinois (Part II)”